I have always wanted to have a second monitor for quite some times now so that I can read the tutorial on one screen while practicing the program on the other.  It is much more convenience, I don’t have to flip over the windows endlessly and removes one of the stumbling blocks on the learning curve. Although it is also possible to have both windows cramped side by side on one screen, but then the drawback is that I have to be contented with the smallish windows.

Learning a program is much more easier

Just a few days ago, I had purchased a used 17 inch Dell monitor.  This was what I had been looking for, a small 17 inch monitor that could be flipped over to portrait mode.  It was a priority, easy reading on narrow screen than wide and not too tall.  Technology for having two or more monitors on a PC for the masses had been around for quite a while. The setting-up for multiple monitors should be quite easy as of now given the time period for it to mature.  I must say that the installation was quite a breeze except for the initial hiccup.  After attaching the second monitor to the graphics card VGA port (the primary was on the DVI-I port) both screens went blank while the computer did booted up.  This made me frantically searched the internet for the howtos.  From what I read, I had the requirement but it did not explained my problem.  Then it struck me that it could be the bios setup.  A check into the bios and changing the default initial search for graphics card on PCIE bus solved the problem.  The startup process was shown on both of the monitors. For the rest of the setting I encountered no problem at all. 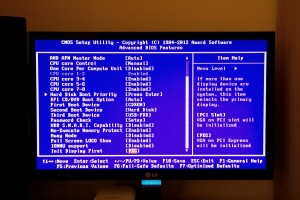 I set the display system to extended mode.  This made the secondary monitor to the right of the main monitor by default.  Then in the “Creating and Arranging Desktop” of the AMD VISION Engine Control Center, I changed the position of the secondary monitor to the left of the main monitor.  That is all about it.  Although I would like to have an individual desktop on an individual monitor (not extended or multiple desktops on a single main monitor), that I found out is not possible.  That is to my knowledge as of now.

Note: It is possible with additional graphics cards and specialised software to have two or more users simultaneously or Multi-PC but that is a different category. 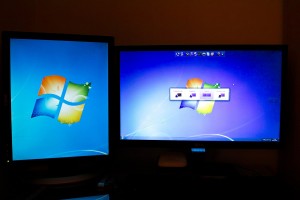 To summarise, basically the process for setting-up two (or more) displays is as follows:

The downside of using an old monitor is that the resolution is low compared to the high resolution of the new monitor today.

(Update:  The resolution of the Dell monitor is quite okay, 1280 x 1024. But using the analog port of the D connector the max resolution is not possible unless there is a driver for it. Problem solved by connecting it to the digital DVI-I port and the main monitor on the digital HDMI port.  I got away with some mess caused by the cables and just use the speakers on the monitor, not the one shown here.)