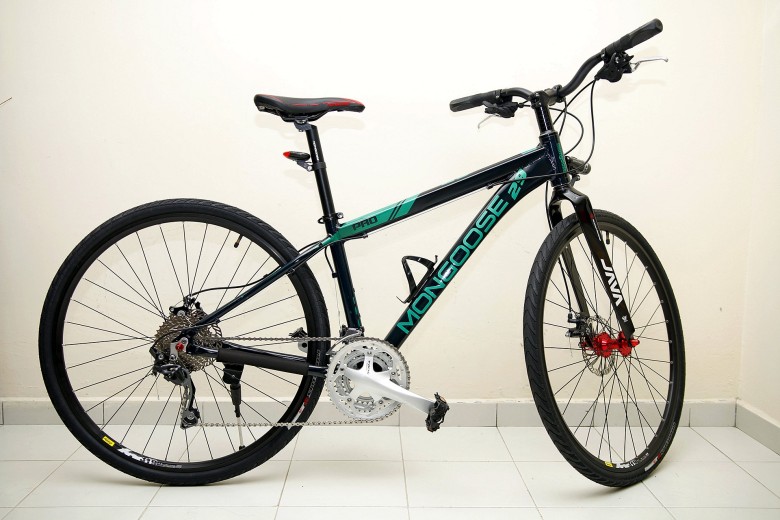 The cyclo-cross is a hybrid bike. Basically it is just a road bike with wider tyres for off-road cycling and is limited in its adventure off-road due to the drop handlebar.  The next class of bicycle, a notch up from cyclo-cross for a more adventurous off-road cycling, is known as hybrid bike and instead of the drop handlebar it is fitted with flat or riser bar. This is the generally accepted classification but there are statements that say a hybrid bike is anything in-between a road bike and a mountain bike. So, It is just a matter of how close the bike is to either the road bike or the mountain bike.

That said, I have just completed converting a 29er Mongoose Hogan Pro brand mountain bike into a hybrid bike. It has a nice frame size which is just right for me. This hybrid bike is still capable of a good sprint on road but the cyclo-cross is better and of course for off-road cycling, the hybrid is better suited than the cyclo-cross.  As with the cyclo-cross built just recently, all bearings excluding pedal bearings but including the jockey pulleys on the rear derailleur are sealed bearing only that I have yet to receive delivery of the jockey pulleys meant for the hybrid bike.  Also, both bike fitted with composite aluminium/carbon fork. 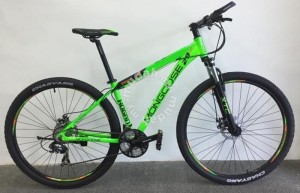 The base bike is similar to this mountain bike except for its colour (Picture from mudah.my). I only retain the frame, seatpost, seatpost clip, saddle, rear & front derailleurs, bike stand, disc brake calipers & rotors and front white reflector mount.  Could use the straight bar & stem but I prefer a riser bar and the stem diameter is just too big for the riser bar. Replace the 8 speed freewheel with a 10 speed cassette and a bigger 3 speed crankset 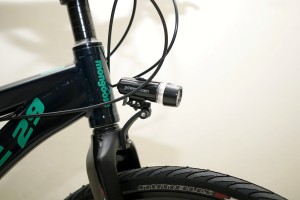 Here’s the reflector mount converted to hold the headlight 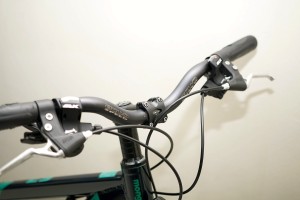 Advice on lacing followed strictly, not only the valve is in clear space, it is also facing the logo on the alloy hub. Wheels fitted with 700x38C tyres

Cut away 3/4 of the hollow iron rod, had a hollow aluminium rod inserted held by a small bolt to make it lighter and adjustable 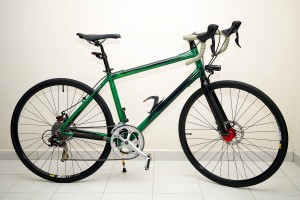 Here’s the previous cyclo-cross now sporting a bigger crankset (53/39T) and bigger wheels. Fitted with 700x28C tyres for now. The front fork should be able to accommodate up to 700x32C comfortably

Once a bike mechanic told me that a 10 speed cassette needs a 10 speed dérailleur. No matter how you adjust it, it will just not work. I took the advice and kept it in mind. This hybrid bike sports a 11-36T 10 speed cassette and 3 speed 50-39-30T crankset operated by a Shimano SLX 2/3 x 10 speed shifters. I intentionally put a 7 speed rear dérailleur on it (the original dérailleur that’s on the mountain bike) . Even though the dérailleur covers the whole range of the cassette sprockets, it skips sprockets twice on the lower (smaller) end. I replace the dérailleur with a Shimano RD-M610 10 speed rear dérailleur, it works just fine. On a closer look at the two dérailleurs, the 10 speed has a less incline angle inwards and tighter spring. I guess that are what made it work. Perhaps if the spring of the 7 speed dérailleur made tighter, it too might work.

I had came to know about Cable Pull and Shift Ratio.  The cable pull on the 10 speed Shimano MTB shifters is 3.4mm, more than its 7(2.9mm), 8(2.8mm) or 9(2.5mm) speed siblings, though the shift ratio is the same for all, that is 1.7 except for Dyna Sis system.  Cable Pull multiply by Shift Ratio will give Cog (Sprocket) Pitch.  Shimano 10 speed sprocket pitch is 3.95 mm. Hence that explained why the skipping of the sprockets when using a non 10 speed rear derailleur.

Then again, all is not lost.  The cable pull of Shimano 10 speed road shifter is 2.3 mm. This will make it practically compatible with the less than 10 speed rear derailleurs. 2.3mm multiply by 1.7 equal 3.91mm, almost about equal the 3.95mm sprocket pitch.  So I had managed to make a 10 speed 105 STI shifter to work with a Tourney TX rear derailleur.