This had been my first attendance to watch a F1 GP race live in person. Many times before I wanted to attend but I don’t really have a strong enough urge to give it a full commitment. There was a pulling factor though this time, and that pulling factor was Lotus Racing.

I bought an uncovered hillstand ticket for RM100. The ticket allowed me to attend for two days, Saturday qualifying and Sunday race, but I could only attend the Sunday race. The race was scheduled at 4.00 pm in late afternoon and there were other programmed events for the fans which began at 11.00 am. Obviously some were for VIPs and the privileged. They got to walk around the pit lane. Grand stand ticket holders got to see the happenings on the grid before the race, one of which was the drivers’ track parade. Hillstand? Well, we had the palm trees.

There was an autograph session by the F1 drivers from 12.00 pm to 1.00 pm at the circuit Welcome Centre. Drivers attended the session in a group of eight (4 teams). One group after another. Each group had about just 20 minutes with the fans. So many people so little time, only those who were early and managed to get near the tables were the lucky few. I managed to stand next to a line that cordoned an area where the cars ferrying the drivers parked and got a few clear unblocked snaps.

Once the session over, I went straight to the hillstand. There was an aerial display put up by the RMAF pilots in their Mig-29s. I had always admire Russian aircrafts, they are awesome in aerial manoeuvres. I remember seeing a Sukhoi performing a cobra manoeuvre many years ago at an aerospace exhibition in Singapore. 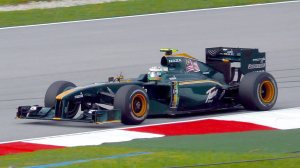 Heikki Kovalainen in the Lotus T127

As usual in every F1 race, there was a warming-up lap around the circuit prior to the race start. The engines sounded kind of rough and sputtered on braking after the long straight for the sharp corner. But that was just a warming-up, the real screeching and screaming sounds was during race time, which, after more than an hour of bombardment to my eardrums, did cause me a tad bit of discomfort. Both of the Lotus cars had somehow managed to rough it out with the Virgins, touching one another in the early part of the race. Anyway both Lotus cars completed the race albeit Heikki Kovalainen was ten laps down after being in the pit with hydraulic problem. Only Jarno Trulli got a classified finished at 17th behind the other new teams, still not so bad for the Lotus team. The race was a breakthrough for Hispania Racing. Both of their drivers, Karun Chandhok and Bruno Senna drove to the chequered flag finishing 15th and 16th respectively, theirs and the team first finished since the start of the 2010 season. Same goes to Lucas Di Grassi of Virgin Racing who finished 14th for the team first complete race. Timo Glock, the other Virgin driver, had a DNF. Overall there were 7 DNFs which include Michael Schumacher for having a wheel nut problem. The full race result is here:

More photographs on my flickr account here. Not so good panning though except for one or two.

As of today, four more weeks to go before the start of the first 2010 F1 race in Bahrain on the 4th of March. Two of the four new teams, Virgin and Lotus, are testing their cars in Jerez this week. This left two more teams, USF1 and Campos, to show up with their cars. Of these two teams, one team seems unlikely to make the grid while the other might probably will albeit in another form. On another note, there is one more team, Stefan, waiting by the side ready to jump in. Hopefully all is well.

I have been following F1 for quite a while now. Now I have a team to root for. Go Lotus go, smoke em. Also, I will be watching in earnest, the other new team, Virgin. They have decided to do away with wind tunnel and rely solely on Computation Fluid Dynamic or CFD. To those who have not heard of it, CFD basically is a simulation program.

I do not know much about wind tunnel but I do know computer. While having huge computational power helps in shortening the computing time, it is the CFD program that matters. To produce a good and accurate simulation in aerodynamic, first, the programmer must have detailed knowledge in aerodynamic. The resulting CFD program will then at the very best, be equalled to his knowledge. Second, the coding of the program with all the algorithms must be accurate and no bug. Third and last, the person that is using the program. He/she must know what he/she is doing very well. These are the basic limits to a good and accurate CFD approach in designing F1 car in my opinion. As we know Rome was not built in a day so too are CFD programs. As time goes by, it will only be getting better and better. Just look at the aeroplane today and compare it to the one built by the Wright Brothers. Whether CFD only approach is right or wrong, we will know it at the end of the year.

One for the wallpaper