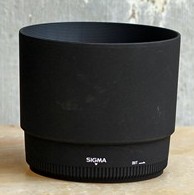 The hood that came with the Sigma lens that I bought was not locking when attached to the lens, not even a feel of tightness. I regretted not to give it more attention and to rectify it. Eventually I lost it when it decided to go for a swim in the sea while I was on a ferry.

It was made of plastic, thin, large and elastic. When I got the replacement, I made a study of its locking mechanism. There was two length of grooves on opposite sides on the circumference at the tip of the lens with a small mount at the end of it. On the hood it was the opposite, there was two short length of ridges on the inner circumference that would slot along the grooves on the lens. Each of these ridges had a notch about 5mm from both ends (one was redundant). By design, this notch was supposed to sit over the mount on the lens after the leading edge of the ridge had scrapped over the mount and lock the hood in place. In my case, this did not happened as it was loose. I assumed that it was either due to manufacturing error/defect or the elastic nature of the thin plastic hood that caused the hood never got to lock in place as designed. Probably my old hood had a low ridge because I did not feel any resistance when attaching the hood. Or perhaps it was ok only that it needed brute force to get the ridge ride over the mount. It’s tight when new I guess. 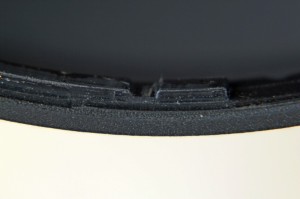 Ridge and Notch on hood

The new Sigma 150-600mm has an improved locking mechanism with better locking.