My rented house in Kulai (now Kulaijaya), Johor, Malaysia do not have an outdoor antenna. For local tv channels reception using indoor antenna, it is good since the transmitters are on a mountain nearby. I want to receive good analog tv signals from down south Singapore as well as from Riau, Indonesia which I estimated some 80 to 100 km away.

Since the ball had started rolling in constructing antennas (previously for my wireless client and the access point), I began to search for a good high gain UHF antenna. After a while, my attention was immediately focused on a little known, at least to me, Gray-Hoverman antenna. Interesting comments and feedbacks. What made me attracted to this design was the high gain plateau that covered most of the channels I’m interested in. Without much hesitant, I began on planning although I felt that this antenna was a bit on the hard side to construct. 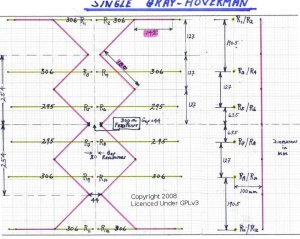 Having had the diagram in hand, I figured about doing it my way based on those projects done by others. Once done, I laid down the plan. The reflectors would come from aluminium tubes salvaged from scrap antennas although some were of different diameters. Frame would be constructed from domestic pvc water piping tubes, T joints and tube holders. The radiator elements would be a 6mm diameter copper tube. I then listed down what were the items needed to be bought, the amount required and the length.

Here’s the rest of the construction pics at certain stages.

I have constructed a GH10n3 Gray Hoverman which can be viewed here.